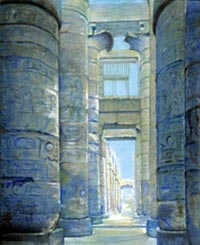 The mystical teachings of the Rosicrucian Order, AMORC, are presented in booklets called monographs, and the lessons are divided into two main sections - the Neophyte section and the Temple section. Following is a description of some of the subjects covered in the first five years of the Rosicrucian system.

In ancient times, if you wished to study the great mysteries, you would travel to a temple and petition for admittance as a student.

Once accepted as a beginning student, you would be known as a Neophyte, and you would enter the Atrium, or reception chamber of the temple.

In the Atrium, you would receive preliminary instructions before being allowed to enter the main temple itself and study the higher teachings.

Following the analogy of the ancient temples, the early lessons are called Atrium lessons and beginning Rosicrucian students are called Neophytes.

Right from the start, the introductory monographs present basic Rosicrucian concepts that you can apply in practical ways. One of the first things you learn as a Neophyte is that you are a dual being. In addition to your five physical senses, you also have a psychic sense. The exercises in these introductory lessons are designed to gradually awaken and develop the psychic faculty. The exercises presented here and throughout the entire Rosicrucian system allow you to discover for yourself through direct experience how these principles work.

In the introductory lessons you learned about fundamental principles of consciousness. The First Atrium goes further, exploring consciousness as the organizing principle of matter, and explaining the composition and structure of matter and its vibratory nature. You'll learn how the creative power of thought affects the material world. This power is demonstrated through exercises in the techniques of concentration, visualization, and mental creation.

Your understanding of the connection between mind and matter will now be expanded to include the connection between the mind and the physical body. The Second Atrium explores how your thoughts influence your health, the role of proper breathing in psychic development as well as health and vitality, and Rosicrucian healing techniques. As you develop your body's psychic centers, you gradually awaken your psychic faculties, such as the ability to perceive the aura. You will also experience the mystical effect of sounds on the psychic centers as well as on the physical body.

The Third Atrium moves beyond the physical body and the psychic faculties into the realm of the mystical. As you become more attuned with your inner source of wisdom, you'll become more receptive to the subtle inner promptings of intuition, inspiration, and illumination. These lessons also explore the nature of soul and spiritual evolution, reincarnation and karma, and the cycles of the soul.

Having completed the lessons of the Neophyte section, you stand at an important milestone in your progress along the mystical path. No longer a Neophyte, you are now ready to leave the Atrium and enter the Temple. Your studies in the Neophyte section established the foundation for the lessons of the Temple Degrees. You have been introduced to the various elements of the Rosicrucian system and had the opportunity to practice many of the principles presented through simple experiments. Now the Temple Degrees will further develop these elements, providing additional depth and practical applications of the principles.

The First Temple Degree introduces the concept of polarity and its relationship to the subatomic world and its differing rates of vibration. It introduces the full spectrum of physical and nonphysical manifestation. An understanding of these subjects gives you an appreciation for the system and order of the universe, the interconnectedness of all nature, and how everything is governed by natural law.

The Second Temple Degree explores the workings of the mind. You'll learn how to use your various mental faculties to strengthen your will, eliminate bad habits and establish good ones, tap into the levels of your subconscious, reason more effectively, and integrate principles of psychology and mysticism to achieve your personal goals.

The Third Temple Degree explores the meaning of life on many levels, including living and “non-living” matter, life on the cellular level, the mysteries of death and rebirth, and the eternal nature of the soul.

The Fourth Temple Degree introduces Rosicrucian ontology (the study of the nature of being) and lays out the cosmological framework for all creation. It explores the meaning, understanding, and use of symbols as the language of the subconscious.

A mystic, by nature, is fundamentally a philosopher. In the Fifth Temple Degree, you will study excerpts from the works of classical philosophers. Your exploration of the ancient roots of Rosicrucian philosophy will demonstrate the timelessness of these principles. Thoughts of the following philosophers are presented: Thales, Solon, Pythagoras, Heraclitus, Democritus, Empedocles, Socrates, Plato, and Aristotle.

The exercises and experiments of all the previous Degrees have contributed to your gradual development, providing you with the necessary foundation for the advanced techniques of the Seventh, Eighth, and Ninth Degrees. In the Seventh Degree you will learn how to accomplish psychic projection, how to develop your personal aura and perceive other people’s auras, and how to further develop your psychic centers and psychic perception. You will also receive a thorough explanation of the physiological, psychic, and spiritual influence of specific mystical sounds.

The Eighth Temple Degree explores in depth the theme of immortality—the mysteries of birth and death, reincarnation and karma, and the evolution of the soul personality.

If you have conscientiously studied and practiced the exercises and experiments of the earlier Degrees, these techniques will by now have become second nature, and you'll be well prepared to successfully undertake the advanced experiments of the Ninth Degree. This Degree gives you the opportunity to utilize the highest metaphysical powers in practical ways to affect positive conditions in your environment and your life in accordance with the greatest good.

Beyond the Ninth Degree

The Rosicrucian Order, AMORC, is not just a course of study, but a way of life. While the essential Rosicrucian teachings are covered in the first five years, the exploration of universal laws is truly a lifelong study. As long as we live, we never stop learning. Therefore, the Rosicrucian lessons continue for many years beyond the Ninth Degree, providing you with even greater insights and exploration of the Rosicrucian principles and techniques.

The Journey into Self and the Mystical Path